TravelByte #27: Why Are They Spraying My Aircraft Cabin?

Have you recently flown into India or perhaps landed in Panama or Jamaica? If so, you may have noticed a mist filling the cabin as your plane started its final approach. Maybe flight attendants walked down the aisle with spray cans or a vapor came down from the ceiling vents? The experience can be quite disconcerting and possibly harmful for passengers with certain health issues.

Around the world some countries mandate that incoming flights spray the aircraft while passengers are still on board. The spray is an insecticide and the process is termed disinsection. The rationale for this measure is specified in the 2005 WHO International Health Regulations as follows:

“International air travel carries the risk of inadvertent transport of mosquito vectors (and the diseases they transmit) into countries where they were not previously found. One method specified in the International Health Regulations (IHR, 2005) to counter this risk is spraying of  insecticides on board aircraft – a process known as aircraft disinsection.”

Disinsection is permitted under international law in order to protect “public health, agriculture and the environment. The World Health Organization and the International Civil Aviation Organization stipulate two approaches for aircraft disinsection– (1) spray the aircraft cabin with an aerosolized insecticide while passengers are on board or (2) or spray or treat the aircraft’s interior surfaces with a residual insecticide (residual method) while passengers are not on board.”

As posted in June 2017 on the U.S. Department of Transportation (DOT) website:

“Under the Chicago Convention, which governs international civil aviation, a country can impose a disinsection requirement should they perceive a threat to their public health,  agriculture or environment. While most countries do not require in-bound flights to spray, many countries reserve the right to use disinsection if they perceive a vector or disease spread. Accordingly, travelers are advised to check with their travel agent or airline reservations agent when booking flights or if they have questions about their final destination’s policy.”

Are there health risks?

According to a 2010 article published on the website Alor Dive, disinsection was declared safe by the WHO in 1995 when performed properly.  Although data supporting  a causal relationship is lacking, there is still much debate about disinsection safety and its human effects among environmentalists, academics, health professionals, and the flying public.

What about flights coming into the United States?

Although CDC has the authority to require disinsection under the Code of Federal Regulations, disinsection is not currently required for airplanes or ships arriving at U.S. ports of entry. Regarding the value of disinsection, CDC does not endorse this approach:

“There is no evidence to show that using insecticide to kill mosquitoes inside aircraft cabins is effective in preventing introduction and spread of mosquito-borne diseases. Given lack of    efficacy, drawbacks to consider include possible adverse health effects (including allergic reactions) in crew members or passengers, damage to aircraft materials, and objections by passengers and crewmembers. The issue of emerging resistance to insecticides among mosquito species is another factor to weigh when considering disinsection. There are currently no products approved by the Environmental Protection Agency for disinsection inside an occupied aircraft cabin.”

What can a concerned traveler do?

Bill McGee, a contributing editor to Consumer Reports and the former editor of Consumer Reports Travel Letter, is an FAA-licensed aircraft dispatcher who worked in airline operations and management for several years. He shares his view of disinsection in a USA Today article:

“Proponents of current aircraft disinsection policies note that failing to address airborne disease is unthinkable, while those worried about harmful side effects recommend alternative methodologies. What seems clear is far too many airline passengers are unaware of such issues until they are faced with mandatory spraying, so the need for greater education is apparent.”

McGee offers these recommendations for passengers, especially those with asthma, respiratory allergies, reactive airway disease, and other health issues:

For further reading: Why aircraft disinsection? WHO Bulletin 2000 78 (8) Gratz, Steffen, and Cocksedge 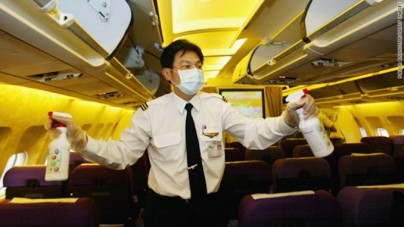